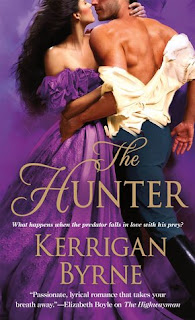 
I was waiting for this romance with the fiercest anticipation. After The Highwayman I wanted to read again something so painfully but also peacefully moving and touching. And yes, The Hunter is moving and touching, and I loved the story; I loved the fact that Argent is portrayed as the coldest villain and despite his feelings towards Millie, in the end his redemption is not so unbelievably drastic. Which is also what had happened with Dorian in the previous romance. I adored the depth of his love and protectiveness for Millie, I loved Millie's response to those feelings and I loved the celebration the author did of the love that exists between a mother and a son. It was that kind of realisation that Argent needed to accept and I cried a lot when he comfort Millie's son; which wasn't unexpected.

On the other hand however, I found slightly strange that it didn't really take much time for Millie to trust Argent; considered he had tried to assassinate her three times, if I were her I would have been a bit more guarded around him, despite the strong and undeniable attraction towards the man. You never know...

Said that, I adored this romance, Byrne knows how to portray emotions, she knows how to transcript them in a way that absorbs the reader, creating a turmoil of emotions to then let them fall in the right peaceful place.

I'd suggest this series also to the most skepticals of romances. I've cried for other romances in the past, it's not an event that it happened her too, however the difference is that Byrne's stories so far succeeded in moving me at a deeper emotional level, I believe it is not easy to understand without actually reading them. Do yourself a favour and read the series, you won't be disappointed.