Review: Last Night with the Duke (The Rakes of St. James) - ARC 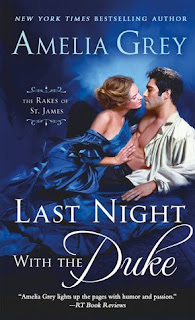 I am not a big fan on insta-lust story. Yes, sure attraction is wanted, curiosity is wanted, but the idea that a man who sees me for the first time is immediately just thinking to strip me naked, would probably give me the creeps. Slow down man.

Probably it is because I cannot find realistic that a person who thinks like that would be able to appreciate something else in a woman aside from the physical side. And indeed the trap worked, I couldn't feel any emotional attraction between them, until the novel was much closer to the epilogue than the prologue.

That said, I don't think this is the only issue here. I found the pace of the whole story slow and the insistence exercised by the hero to get the heroine to be his twin sister's chaperone is a bit unnerving. Plus, the reason why he needs this respectable chaperone is to keep his sister untarnished by his behaviour...I say it again, in case it wasn't clear, she is HIS sister. To me what he wants is slightly difficult to achieve, isn't it Duke?

All this said I will surprise you saying that, objectively it was not that bad, overall is nice, it simply did not suit me that much. And I am one who runs with shiny eyes to get an HR when I read that the heroine is a governess/chaperone.

Email ThisBlogThis!Share to TwitterShare to FacebookShare to Pinterest
Labels: arc, grey, last night with the duke, the rakes of st. james