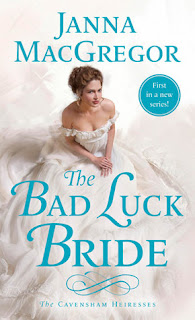 Let's start with a fact. I have a crave for stories where the hero does something he shouldn't to against the heroine and then tries his hardest to conquer her back. It's a strange fetichism, but here it is.
In Janna MacGregor's debut novel we have it. Yay!


Our hero, Alexander Hallworth, Marquess of Pembrooke, to take revenge against one of his closest friend Paul, who considers responsible for his younger sister's suicide, decides to ruin his life at every step he takes; including snatching the heiress he's engaged to, Lady Claire Cavensham.

Although Claire is oblivious to Alexander's plan to take revenge, one would imagine that, considering the premises, the wedding won't be a great success from the beginning. And you would be wrong, or at least I was.
The two seem to share a lovely union since the beginning, where Alexander shows extreme kindness and care towards his new wife. However, Claire is rumoured to be cursed, she has been engaged four times before Alexander and each time, the fiancée has been left somewhat injured and the marriage annulled. Obviously this is a hurtful burden to be held for Claire and Alexander continuously comforts her, they grow very close and the feelings for one another strengthen day by day. Which I found extremely sweet; and I so like this type of sweetness.

That said, it is deducible that Alexander's secret scheme is a bomb ready to explode.

I truly liked this novel, I found it compelling and extremely entertaining, as well as dramatically sweet. As mentioned above, it is a debut novel, which it is surprising, The Bad Luck Bride is in fact, very well written and of the same quality of novels written by much more experienced writers.

It is certainly a must-read and I am genuinely looking forward to MacGregor's next story.