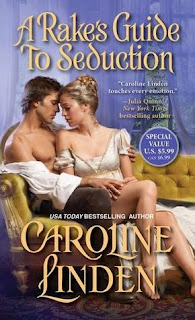 
I wonder why all heroines seem to smell of lemons? I think it is strange...what's this passion about lemons? I don't understand.

However, this was not the first time I read A Rake's Guide to Seduction, which was first published in 2008. I really liked it the first time, I had given it 4.5/5 on Goodreads, I had found it very sweet and it's the type of story I love: the hero is secretly in love with the heroine, who's the hero's friend's little sister.

Moreover here, everything charming happens, he decides to ask her brother for her hand after several internal struggles given by the feeling of not being good enough for her, unfortunately she has already received an offer which she had accepted, she is unaware of the hero's feeling and she gets married to the wrong guy, the husband dies after some years of unhappy marriage, she's sad and feel bad because her failed marriage, the hero in the meanwhile has managed to be successful, but he still has a soft spot for the newly widowed heroine, a series of circumstances put them in the same place and he decides to make her happy again and while doing that he realises that indeed he has never stopped loving her...(this is less than half of the novel so do not fret).

The first time I read it, I really liked all of it, but something put me a little bit of, and this is the fact that they get caught after they have had a love moment and she's kind of "forced" to think about marry again. HOWEVER, I don't know why, that didn't bother me at all. I actually think it makes the story more interesting, especially because of the developments that the fact puts in motion. How strange tastes are.

So, this is my new opinion (and possibly last): I loved it. It is one of the sweetest story I've ever read, maybe to Quinn's When He Was Wicked level. For sure the heroes are equally adorable.
The passion between Anthony and Celia, in the story, is amazing; the heroine is great, she definitely becomes a mature young lady throughout the plot and I adored how she wants to protect the hero.

** I received an Advanced Reader Copy (ARC) of this book on courtesy of NetGalley and Kensington Books - Zebra in exchange for an honest review, thank you for the opportunity.