Review: The Rogue Is Back in Town (The Wayward Wallflowers) - ARC 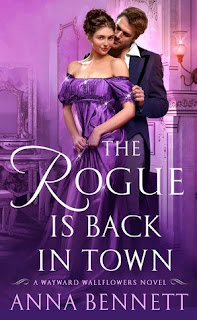 
Now, Julie was definitely not my favourite kind of heroine. Indeed, I would say that she often seems quite capricious, sometimes naive and also unselessly virtous (I mean in general, not in the love story).
Moreover, the reason why I could not really love the story is that I honestly could not appreciate the romantic plot, and its developments, between the protagonists. In fact, I have unfortunately been pretty untouched by it.

Even more, I enjoyed the previous novels well enough, but where the heck were the heroine's sisters in all this mess??? I am pretty sure that it would have been noticeable, at least to such emotionally close family members, if a problematic economic situation was presenting itself. Like it is described in this instance.

So, in the end, my two and half stars go to the villain; who despite what it seems to be the general thought here, I liked; not because I found him to be a nice person obviously, quite the contrary. I found him to be a 100% bad guy and not one of those that at some point, despite being described as the cruelest, ends up being a person with all the reasons to act wicked. Sometimes a bad person is 'naturally' bad.

Nevertheless, I can understand why some readers might like it, it is well written and cohesive, not necessarily objectively a boring or bad story.

** I received an Advanced Reader Copy (ARC) of this book on courtesy of NetGalley and St. Martin's Press in exchange for an honest review, thank you for the opportunity.
Di Unknown